Using meat in desserts seems like the next logical step in a world where chefs must “push the culinary envelope” in order to stay ahead of the competition. Already we’ve seen foie gras used in every kind of dessert, from doughnuts to ice cream, and bacon is all but a dessert staple these days. Let’s look at some of the best ways people have incorporated meat into desserts. To ease you into the idea of desserts that incorporate meat, let’s start with a favorite that uses just a hint of savory. It seems like right now (and in the past couple of years) everybody has been incorporating bacon into sweets. But if you aren’t ready for this bacon-latticed apple pie or bacon mini cheesecakes just yet, try this recipe for candied bacon chocolate chip cookies. You can add as much or as little candied bacon as suits your preference and clot your arteries at your leisure. 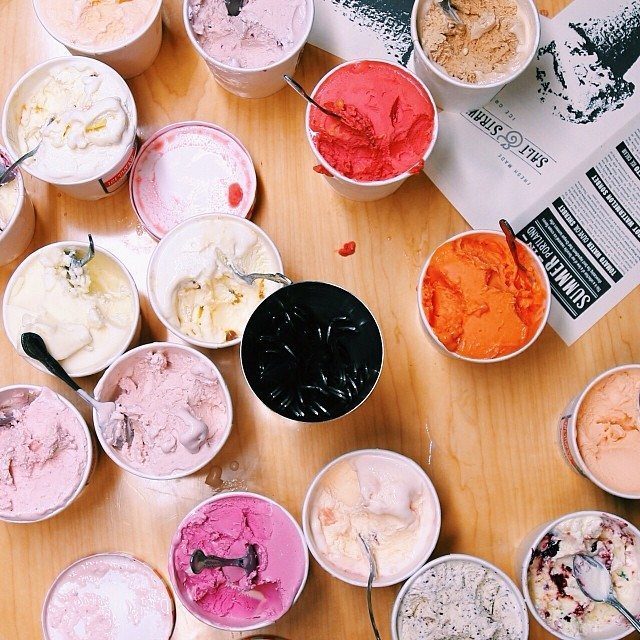 If chocolate isn’t your thing and you have a pound of marrow bones and home-grown cherries just lying around, perhaps you are ready to make this next-level bone marrow and smoked cherry ice cream, which was originally created at Salt & Straw, a Portland-based ice cream shop. I asked a friend who has tried it, and she said “It doesn’t taste meaty at all. It’s smoky and creamy. With a little bit of sweet.” But let’s face it. Bone marrow isn’t for everybody. This traditional Turkish pudding might be the answer. Tavuk gogsu is creamy, sweet, cinnamon-y, and gets its unique texture from chicken breast. This dessert is often served with ice cream in the summer, but is also delicious all on its own. If you want say you’ve had a mincemeat pie, you can buy jarred mincemeat at almost any grocery store. But jarred mincemeat, comprised of apples, raisins, and currants, hardly ever includes the most important ingredient: meat. I never knew about meat-free mincemeat until I was well into my 20s because my mom always used a traditional recipe clipped from a newspaper from the 1930s. While the texture of this pie is meaty, the flavor is not savory at all. It’s sweet and spicy and even fruity. And it is absolutely delicious topped with homemade whipped cream. But the best way to eat mincemeat is cold and in a bowl straight from the refrigerator. (Trust me on this.) Here is the recipe, which you will not regret using.

Boil roast in 3 c. water in large stew pot, adding more water as necessary until the meat is tender and comes apart easily. Remove the meat from the juice and let it cool and then shred it (or run it through a food processor). Core and chop apples and orange (removing seeds but leaving on the peel) into bite-sized pieces and add them to the meat juice. Let this simmer for about an hour. Then add all other ingredients, including the meat. Let the mixture simmer for 2-3 hours, adding small amounts of water as necessary until mincemeat thickens and has a consistent texture throughout. Makes 4 double-crust pies.

Are you ready to try your next meat dessert today?